Location: on the Wells Road below Hanley Terrace; a door and windows once gave access to the well chamber or grotto.
Description: a subterranean public well house for local residents with roadside access now walled up.

This interesting site justifies total restoration. It comprises an underground chamber at the back of which is a well. It is believed to have been constructed as a Victorian ornamental grotto landscape feature. The Gothic Well provided a domestic water supply and one can imagine servants collecting water from the underground chamber and carrying it back to the sculleries and kitchens using the nearby archway and steps.

The style of the former entrance on the main road was neo-gothic and was part of a much larger Victorian development, which included the substantial houses above and to the right in Hanley Terrace. For the occupants of the house directly above the well there was a shaft down from the garden above, which avoided the necessity of using the pavement entrance. This house was formerly known as The Pleasance and the spring is mentioned in the 1919 sale catalogue of the Hornyold Estate. 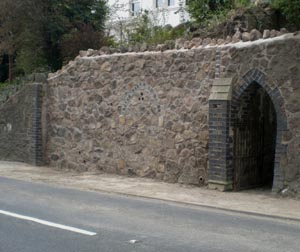 During the Second World War the chamber was used as an air raid shelter and the iron reinforcing was still there in the 1990s. An entrance has been constructed from the garden above enabling the chamber to be used as a garden store. This enabled the roadside entrance to be bricked up in 2010 after the door rotted.
Although once capped off, the owner for many years, David Prentice, a renowned local artist, had secured access to the water again.
Unfortunately in the spring of 2013 the roadside access to the Gothic Well was obliterated completely. The windows and doors were removed and the wall finished in Malvern Stone. As a result this feature has been downgraded with its splash or wow factor reduced from four splashes to one.
The question arises however, was the Gothic Well designed as a grotto? The influence for building garden grottos came from Italy as part of the 15/16th century Renaissance movement. Capturing the ethos of the ancient Greeks and Romans, Italian landscape designers adopted the grotto as an expression of culture and art inherited from a millennium and a half years previous. The idea of the garden grotto as a mystic cave spread throughout Europe and by the 17th century English estates of the wealthy aristocracy incorporated grottoes in the landscaping of their gardens. Following Nonsuch Palace in the sixteenth century, stately homes such as Wilton and Chatsworth were quick to succumb to this trend. Their grottoes were revered by visitors as each competed to create more elaborate and awe inspiring structures using natural materials such as semi-precious stones and rocks, shells, statues and water features.
Still going strong in Victorian times in Europe, the grotto continued to be a point of interest for the discerning observer. Hazel Jackson, in her book Shell Houses and Grottoes (2001) points out that in the late eighteen and early nineteenth centuries the rustic style was often combined with Gothic Revival features, like pointed windows and door-frames and stained glass windows in the construction of grottoes. Reinforcing the idea that the Gothic Well was once an ornamental grotto is the earlier name of the house The Pleasance. This means a quiet tree-planted area laid out with walks and often statues and fountains. With a little imagination, although converted to an air raid shelter in the Second World War, the Gothic Well could have been restored to an ornamental

grotto. Malvern has lost a unique water feature that could have been transformed into a mystical underground chamber attracting local visitors and interest in the property. The owner David Prentice passed away in 2014, shortly after the destruction of the Gothic Well in 2013. 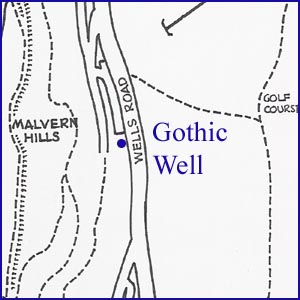 1. Gothic Well by Wendy Harding.
2. After brickwork replaced the doors.
3. The road access walled up in 2013.
The map alongside is a small section of our more comprehensive map of the area. For the complete map together with a description and history of this site see "Celebrated Springs of the Malvern Hills" (2012).
Click on web site below or the top banner to go to the Springs and Wells Site Index.

Site with Malvern Water
1 SPLASH - Lost - Nothing Much To See

Access By Road
Not Open To Public
Free Parking Nearby