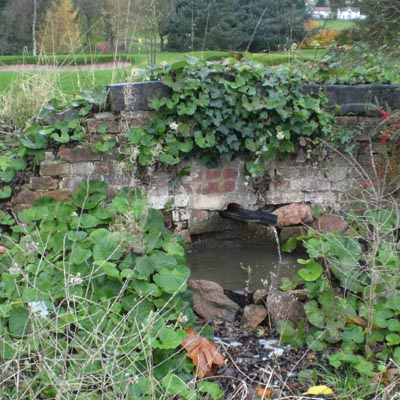 Location: on the west side of the Worcestershire Golf Club House car park, Wood Farm Road, Malvern Wells.
Description: a spout emerging from a bank and flowing into an old cast iron tub.

This attractive spout can be seen at the north end of the club house and is situated in a flower bed. Nothing is known of its history. The spout is fed from a spring which is located 300-400 yards to the south west, in a field. This field spring has been contained but was in a state of disrepair in 2004.

The spout suffered somewhat with the rebuilding of the Club House in 2004. A change of levels and relocating the car park next to the spout meant that it became partially buried. Friends of Malvern Springs and Wells however orchestrated a renovation of the source and landscaping around the spout with the result that it was back in water in 2005. By 2009 however it looks in a rather sorry state and would benefit from a face lift.

Close to the spring is the massive above ground iron tank built during World War II, c.1943, to supply the Ministry of Defence army hospital known as Wood Farm Camp which was nearby and would have been fed by spring water. The tank is no longer in use and there was talk of removing it. It was still in situ in 2009. 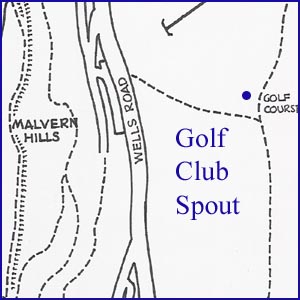 1. The spout, the iron basin remains concealed.
2. Renovation of the spring 2005.

Click on web site below or the top banner to go to the Site Index.