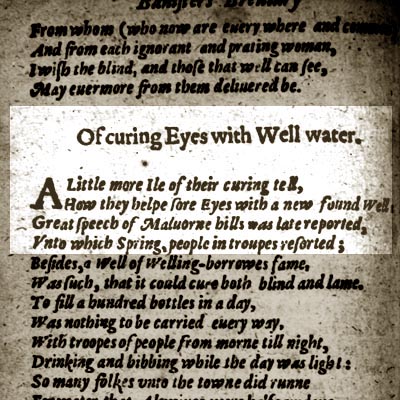 Location: 100 metres directly above the Holy Well.
Description: a depression in the ground containing water.

To get to the Eye Well climb the steps and path to the left of the Holy Well. When you meet a contour path turn left and after a short distance take the first path hard right on to another contour path. After about 100 metres the Eye Well will be found on the left.

When Richard Bannister's A Treatise of One Hundred and Thirteen Diseases of the Eyes and Eyelids was first published in 1622 a contemporary song suggested that the Eye Well had only recently been discovered:

'A little more Ile of their curyng tell,
How they helpe sore Eyes with a new found Well:
Great speeche of Malvorne hills was late reported,
Vnto which Spring, people in troupes resorted;'

The Holy Well, which lies about 100m below the Eye Well, was already well known by that time but it consisted only of a spring and a trough. A late 18th century print shows that a small building was erected near the Eye Well where visitors could shelter before and after bathing their eyes. One common problem that the Eye Well addressed was the effect of the smokey atmosphere in cottages in winter with open fires.

The first recorded named water cure patient was Mary Smith alias Maunsell from Claines, near Worcester. In 1672 she set out to visit Malvern Well hoping to benefit from the water. She carried a passport enabling her to pass through the various parishes on the way, and if she became ill on the journey the overseers of her own parish would pay any medical expenses. To them it was cheaper to send her for treatment than to pay her parish relief for being ill. But it could have been either the Holy or the Eye Well that she visited.[1] Supporting evidence rests with Dr Wall who found that the waters at the Eye Well are not appreciably different from Holy Well, and with Dr Granville who in 1841, commented that the Holy Well is possibly a streamlet, suggesting the Eye Well may be a higher source for Holy Well water. Today the water at the Eye Well is so muddied that it is hard to believe that one would ever apply it to so delicate an area of the anatomy. However in the 17th century the Hills footpaths had not been formed so the waters would have flowed freely downwards. The silting which later took place is probably a direct result of the construction of the path.

Dr John Wall recounted the cure in 1754 of a tradesman's daughter from Bewdley who, for eight or nine months suffered a 'scrophulous ophthalmy' in both eyes and couldn't bear the light. After a week of bathing her eyes at Holy Well her sight was restored to the extent that she could see a tiny flea leaping about on her bed. We can assume that the Eye Well was just as efficient and possibly at that time to be seen as the same source as the then undeveloped Holy Well.

An early account of the Malvern Eye Well appears in 1817 when it is described as being 100 yards higher up the hill above Holy Well and its significance is registered in the addenda to Camden's Britannica as well as Geography Reformed, both important early source works.[2] Early late 18th century pictures of the area indicate that the Eye Well had a building over it at a time when the area was known as Malvern Bath, likely a modest gabled roofed wooden structure.
Chambers quoting Philosophical Transactions [3] said that the least famous one of two neighbouring springs in the locality healed very old ulcers on the legs of a poor fellow; and the spring speedily cured the tetters, a skin disease on the subjects hands. Dr B. was persuaded that in long draughts and lasting dry frosts these waters were more effectually and speedily healing than at other times.'

There is often confusion between `Eye Well' and `Hay Well', one often being a distortion of the other. In Aquae Britannia it is argued that the Eye Well was not the source above Holy Well.[4] It is quite possible therefore, that Mary Smith, alias Maunsell, visited the clear-running waters of Great Malvern's Hay Well rather than the present Eye Well. This supposition is supported by another hypothesis. Ey in Anglo-Saxon denoted water and so over time the origin and pronouciation of the root word was lost.[5]

In the case of Malvern's Eye Well the word "eye" may have been misappropriated over time. It is possible that eye wells were not originally seen as for healing the eyes. One simple explanation is that "eye" merely means the source of the spring. This expression is still used in Australia to this day, especially where a streamlet emerges down a valley.

Alternatively, Eye Wells are perhaps a degeneration of a mythological belief that such wells gave perception and vision. This view is then developed by Bord in Sacred Waters 1985, who observes that the Eye Wells were seen as the eye of God by pilgrims. This description would be sympathetic to Celtic beliefs of water sources generally being extremely sacred and the religious concept of the creation of life. As in Malvern and elsewhere the name degenerated to the supposed healing qualities, which would have resulted from bathing the eyes in clean fresh water rather than a mineralised water.

It seems that the Eye Well became defunct in the 1830s. A letter to the Malvern Gazette in 1927 from Mr W. Wickham of Llandovery, Upper Colwall, says that the Eye Well 'can only be seen as a dry recess in the rock in the upper part of the valley.' He described it as the well in the Holy Well valley and that it had been lost 80 to 90 years earlier, which would have been during the incumbency of Rev Peter Edward Boissier, the perpetual curate of St Peter's, Malvern Wells, who lived at The Dell. This is still an imposing house in Green Lane, adjacent to St Peter's Church and downhill from the Eye Well. Apparently the clergyman living at The Dell had decided to pipe the Eye Well water to his house and hired local man George Sparkes to carry out the work. As soon as he rammed his pick into the ground, 'the water went away and never came back,' said Mr Sparkes.[6] This illustrates the disastrous consequences of tampering with Malvern springs.

William Wickham (1837-1928) was born in Buckinghamshire. He spent his early working life in London as a mineral water maker and came to Malvern as a young man in the early 1860s. He worked first as foreman at The Royal Malvern Brewery and in the 1870s he became Schweppes' manager at Holy Well. When he transferred to their new factory at Colwall in the 1890s he and his family moved to Llandovery, Upper Colwall, where he lived for many years. He was an active member of the Malvern Field Club and could be said to be the first person to take a serious interest in observing and recording the springs and wells of the Malvern Hills. He died at Colwall in March 1928 aged 91.

He moved from bottling beer to bottling water and by the 1870s was working for Schweppes as their manager at the Holy Well. He moved with them to their Colwall bottling plant as foreman.

In 1930 the Eye Well was reported to be a morass. During an attempt to lay on the water to a private house a pickaxe disturbed the rock and the source was lost. This illustrates how interfering with springs can be disastrous, the nature of the Malvern rock being conducive to such occurrences.[7]

This well was again in disrepair by the 1970s and Weaver in 1991 describes it as located about 200 metres above Holy Well and silted up. In the summer of 1992 efforts were made to clear the surrounding debris, remove the silt and unblock the overflow pipe that lies under the path.