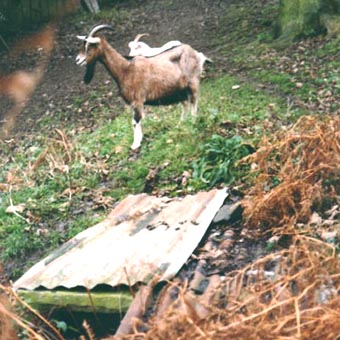 Location: up a short gullet beside some cottages at the southern end of Holywell Road.
Description: an underground tank; spring water that runs down the gullet.

In the 1750s Dr John Wall wrote that the Malvern Hills provided excellent pasture for goats. That made the Malverns not just a healthful spot to stay to take the waters but also to sample the goat whey. A short climb from the Holywell Road will bring you to the spring, which was named after the alleged illicit grazing of goats in the area in the 1990s. Roly Bayliss, a commoner living nearby, was the perpetrator of this so called offence and in 2011 still tended his animals on the hills at the age of 85 years. One detects a certain note of pride in his voice when telling visitors about the naming of the spring.

The spring water is collected in an underground tank made of slate, and covered with stone slabs and old iron. The surplus water used to flow down the gullet to a road drain but there were complaints that water leaking out on to the road might damage property and be a serious road safety hazard. As a result, in the winter of 2000-1 the Highways Partnership of Malvern Hills District Council built an ugly raised manhole and brick structure at the side of the road. This monstrosity was justifeid on grounds of road safety and possible damage to property.[1] Designs were prepared for a more decorative roadside feature by local enthusiasts. In spite of Heritage Lottery Funding being available in the early 2000s, nothing has yet been done to overcome this wasted opportunity.[2]

The spring water used to be the sole water supply to St Andrews House, on the west side of Holywell Road. In 2010 Wendy Grounds recalled living there many years ago. "The houses on Holywell Road were supplied with water coming off the hills. At our house, St Andrew's, pipes came across the hill to big lead tanks at the top of the garden and then flowed into the house and sometimes the water stopped because roots of bracken and other vegetation had got in the pipes so we had to dig a trench across the common to find out where the roots had got in because the pipes weren't put in with cement. They were sort of clipped in. It's very odd to think about it, but that's what it was like in the 1940s." The house is now called the Skerries.

1. St Andrews or Goat Spring.
2. The roadside feature bereft of imagination, supposedly unsuccessfully designed to stop the water spilling on the road, as can be seen.
3. Roly Bayliss, immortalised by the naming of the Goat Spring after his alleged illicit grazing of goats. He is pictured chatting to Cora by the Kettle Sings Well. 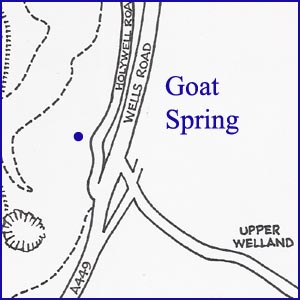