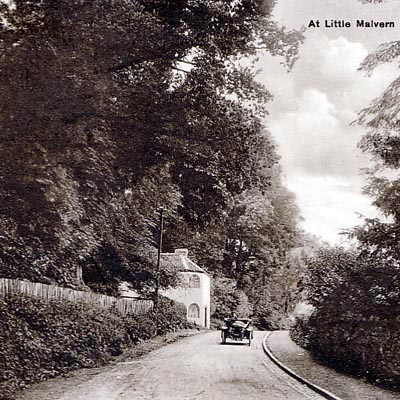 Location: Little Malvern, in the `V' of the junction of the A449 Ledbury Road and the A4104 Welland Road.
Description: an historic well, now contained and with no surviving surface features.

Preamble - There are two wells in this locality, Ditchford's and Mary's or Nancy's Well. Both likely come from the same underground spring but are dealt with separately; see locations 71 Ditchfords Well and 72 Mary or Nancy's Well.

Boast, Malvern, that they springs revive
The drooping patient, scarce alive;
Where, as he gathers strength to toil,
Not e'en thy heights his spirits foil.

Ditchford's Well was originally located near Little Malvern Priory, between the A4104 Welland Road and the A449 Ledbury Road.[1] Today no surface features survive.

Historically Ditchford's Well, had been the main water supply to Little Malvern Priory,[2] which was founded c.1127 and was where Piers Plowman author William Langland spent some years as a novice monk. The source may also have been a Holy Well.

In the early Middle Ages, when Little Malvern priory was founded, 'ditch ford' possibly described a ford associated with the water feature in the picture of Little Malvern Priory. Alternatively if a person, who Ditchford was is uncertain but he or she may have been from an old-established family in the parish of Hanley Castle. The Catholic Church records for Blackmore Park Mission, Hanley Swan, for 1782, 1789 and 1794 show Joan/Joann (probably John) Ditchford as the male sponsor at the baptisms of three local children from different families.

In the early nineteenth century Ditchford's Well rose in an ash coppice about 500 yards north of Little Malvern Priory. At the same time it was said not only that 'an ancient dame conveyed the water, in bottles, to Worcester', but that Ditchford's Well had been known about long before the Holy Well.[3] Holy Well is noted from the early 1600s and so Ditchford's Well predates this. The original location can be found on the 1954 Ordnance Survey map (SO 74, 2.5 inches to the mile which was compiled from the 6 inch sheets fully revised in 1902 and 1926), which marks Ditchford's Well as an ancient site. By 1817, however, the fissure had closed up and the water was running the other side of the hedge and down the road leading to the church. On its way it ran into Mr Price's garden, where it was harnessed for his domestic supply, before running into a drain and ending up in a pool at the top of the adjoining orchard.[3] In 1821 the Worcester Turnpike Trust had widened the road from Malvern Wells towards Hereford, which resulted in the loss of some surface features and the outfall being secured on the eastern side of the Welland Road.

Sometime during the latter part of the nineteenth century Ditchford's Well was further contained and its several underground cisterns can still be seen on the east side of the Welland Road. The cisterns are still in use and supply North Farm, Elmtree and Winter Cottages, though the supply from the well is supplemented with mains water suggesting that the spring is unreliable. Any overflow from these cisterns is believed to run to a further tank near Watery Lane where a streamlet emerges.

This was one of Malvern's ancient sources that, weather permitting, doctors recommended their patients to travel in search of health. The following letter, dated 1768, was sent by C W Bampfylde of Nestercombe to Edward Knight of Wolverley, and was amongst the Knight letters deposited in the Kidderminster Public Library c.1947. 'Dr Charlton recommended Malvern waters to my wife, but is of the opinion they might be drunk on the spot; the season is so far advanced that they might be too cold to drink alone and in any great quantity and if a journey thither could be spared at this time, we should certainly be glad to put it off for several reasons. I shall, therefore, desire Mr Russel to order some water to be sent from Malvern the 1st opportunity, which may be convey'd down the Severn'.[4]

Illustrations:
1. The original site of Ditchfords. The Toll House has now been relocated in the Avoncroft Buildings Museum.
2. Malvern Priory showing a water feature in the right foreground.
3. O.S.6" Map of 1938-49 showing the apporoximate location of Ditchford's Well. (courtesy Ordnance Survey) 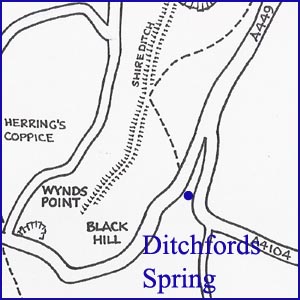