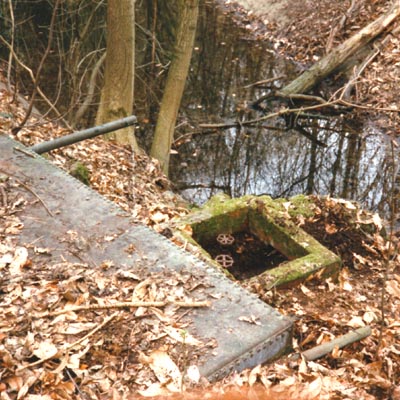 Location: at the foot of a steeply-inclined wood north-east of British Camp and north of British Camp reservoir.
Description: an abandoned spring, pumping house and reservoir, shown on the O.S Explorer 14, grid ref. 769402, as a disused reservoir.

The earliest mention of the Owl's Hole reservoir is in a newspaper report of a Council Committee meeting in 1900. It reported that '...a small auxiliary reservoir, with pumping plant, has been constructed at the Camp, north of the main reservoir...'[1] Five years later a new Act of Parliament enabled Malvern Urban District Council to extend its water supply through an Act of Parliament. Their new scheme included building, at a cost of 600 pounds, a small catchwater reservoir and pumping station here at Owl's Hole, which would pump water into the main reservoir at British Camp.[2]

Thereafter the spring flowed into a blue brick chamber through an inlet pipe and the water then pumped to it's required destination up hill from the purpose built pumping shed. There remains a small open reservoir in the immediate locality, albeit now derelict. The Malvern Hills District Council Water Dept. maintained the supply until the 1960s when a new mains extension from Jubilee Drive was laid.

The triple piston pump, which was made in 1927 by engineers Joseph Evans of Wolverhampton, was removed in August 1994 for restoration and is now in good order. The Crossley engine that powereed the pump was discovered and recovered the following year.


Further Information:
Fishpond Spout - To the east of the Owls Hole lays the two ancient fish ponds of Little Malvern Priory and later Little Malvern Court. Early maps show a spout at the southern end of the two ponds which were fed from springs in the vicinity of Owls Hole. Landscaping has resulted in the original feature being lost as a further pond was created to fill the small valley depression. A spout does however drain the water of the two ancient ponds into the new pond on the same approximate site of the original spout. 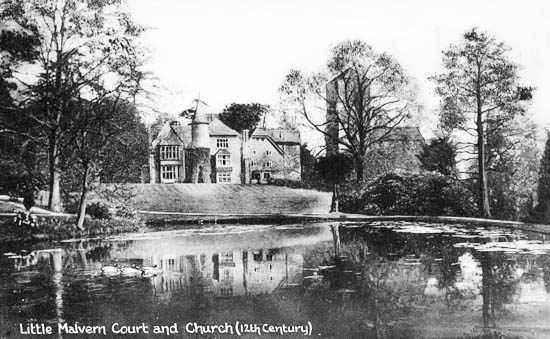 Illustrations:
1. The spring and valve chamber.
2. The Little Malvern Priory fishpond spout in its modern format.
3. The lakes in the grounds of Little Malvern Court, 1915.

4. Little Malvern Court and pool fed by the springs in the vicinity.

Click the Owl to discover the story of the Owl's Hole pump and engine. 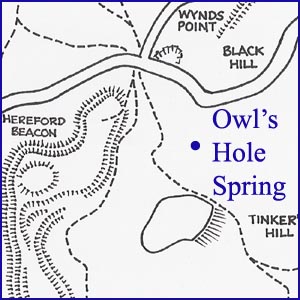 Access On Foot
Not Open To Public
Accessible All Year