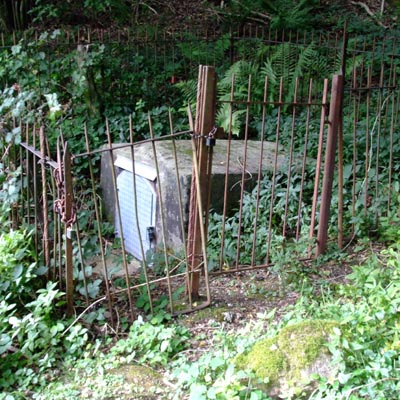 Location: in News Wood (in the parish of Ledbury) south of the Herefordshire Beacon, on the fringe of Eastnor Woods
Description: a spring contained in a small shed surrounded by an iron railing with a substantial covered reservoir nearby.

Walms Well is situated on the south west of the Herefordshire Beacon and was noted in 1848 as being at a height of 755 ft.[1] In 1817 Chambers described it as being below the Giant's Cave, up a nearly impassable road in Newen's Wood in the parish of Ledbury, adding that it was half a mile from the turnpike road and about 3 miles from Holy Well[2] and "a bolt or bow shot of the top of the near adjoining hill".[3] Richardson, in 1930, described the well as lying between Hangman's Hill and the Herefordshire Beacon in the parish of Eastnor and cites it as being the source of the Clynch Brook.[4] Walms Well appears on the first edition Ordnance Survey maps of c.1840.

Derivation of the Name - In 1875 James McKay published a series of essays on scenes and incidents from the lives of ancient Britons. He notes that "In Colwall, just on the other side of the British Camp on the Herefordshire Beacon, we have Walm's Well - which yet is much resorted to by the rustics, on account of what they regard as its admirable curative properties - and Moorall's Well, which, though less known now, was formerly quite as celebrated. These are unquestionably British names, and there can be small doubt that they are so called from the first Silurian Christian Missionaries, who took up their posts in the mountain passes of the Malvern Hill."[5] May later quotes McKay, saying that the well was named after the canonised Walm.

Smith disputes this as another example of romantic history of recent origin, for like Walms Spout Coppice beneath West Malvern its name is derived from the Old English `Wielm', which means a spring. Where this prolific spring emerged from the hillside, local people had built an embankment of wood and mud to make a large bath. This was later reinforced with stone. In the early nineteenth century the bath still had the reputation among the country folk for curing skin diseases, particularly scurvy. Next to the bath they built a tiny wooden hut, which is best described as a one-man changing room. For invalids who could not afford the services of a doctor, a free bath in uncontaminated water was an ideal alternative.

Uses of the Water - Smith notes that the Herefordshire Beacon enjoyed a plentiful supply of water, particularly from Walms Well in News Wood, which was used by the Iron Age settlers c.250 B.C.[6] Mention of the spring also occurs in 1631.[7] According to the Rev J Barrett in his guide book of 1803 the well was popular amongst the country folk for drinking and applying externally. The water, which "had a long and old fame for healing the eyes"[8] was collected by an embankment to form a large bath[9] and a small building alongside the well allowed sufficient room for one person to rest and take the healing waters, the temperature of which on 12 April 1845 was noted to be 48.5 degrees F. It was believed that sulphur in the water acted as the healing agent[10] and was resorted to for the cure of scorbutic eruptions (scurvy).

As late as the 1790s local people still maintained that its water was particularly good for curing disorders of the skin - and leprosy is a severe form of skin disease. They also believed that the water contained sulphur, so with a reputation like that it would have been ideal for lepers to bathe in. Despite a 1923 analysis of the water showing no sulphur and no smell, the application of cold water to the body is known to alleviate or cure a variety of complaints.

The distinguished Worcester medic Sir Charles Hastings MD (1794-1866) was a surprising advocate of Walm's Well. He lived locally at Barnards Green House, now a grade II listed building. In 1832 Sir Charles founded the Provincial Medical and Surgical Association, which later became the British Medical Association. In his Illustrations of the Natural History of Worcestershire of 1834 he said that the water was said to be more efficacious in the cure of skin diseases than St Ann's Well or the Holy Well. This endorsement should not suggest Hastings' overall support of hydrotherapy treatments. He frequently wrote articles about the dangers of hydrotherapy - while he himself prescribed a wide range of orthodox medical treatments that were more likely to kill than cure. His comment may also have been an attempt to wean country folk away from the superstitious idea that saints' wells and holy wells were healing wells.

The Demise of Walms Well - By the mid nineteenth century Walms Well had fallen into disuse; there were no visitors and it was no longer mentioned in guide books.[11] By 1924 Edwin Lees reported that the hut had disappeared but that some of the stonework of the bath was still to be seen.[12] Situated on the Eastnor Estate the well was first contained in 1889; a covered reservoir acts as a collection cistern which was the original supply to Eastnor Castle and village. In 1891, just two years after its containment, the Malvern Local Board presented its draft Bill to Parliament to secure an Act to realise Mr Copland's scheme for a vast new waterworks at the British Camp. There were many petitioners, amongst them Lady Somerset who feared that "through boring, an important spring belonging to her, called Walm's Well, might be interfered with".[13] However the well was situated above the level of the proposed reservoir and the Board gave an undertaking that the well would not be disturbed; and it was not. The water has, as a result of confinement, been inaccessible as a public utility for over 100 years and now the water is totally contained, with the spring covered by a small wooden structure. As early as 1856 the wooden hut for bathers suffering cutaneous disease had been removed according to Lees.[14] Little wonder that the facility was eventually considered for general water supply.

Analyses Mr Wallet, an early nineteenth century surgeon of Great Malvern, and Dr Marcet, tried to analyse the water and concluded that it contained about 12 grains of solid ingredient in a gallon. This comprised carbonat of lime as the principle ingredient with small quantities of carbonat of magnesia, muriate of soda or magnesia and sulphate of soda or magnesia.[15]

Extended Use: Walm's Well received some publicity in 2004. Coca Cola Enterprises, which ran the vintage Schweppes Malvern Waters bottling plant at Colwall, sought to supplement their modest water supply with water from Walm's Well. This was to ensure that they remained competitive in the expanding worldwide market for bottled water and to overcome the seasonality and other supply problems with their existing Primeswell spring water. The long term solution was first formulated by Consulting Engineers in 1998 but it was not until 2004 that it was finally decided that supplementing their supply was essential and the appropriate abstraction and planning enquiries were commenced.


The plan was to bore a horizontal well into the hillside to tap the aquifer. Then to build a new containment facility where the bore emerged near the existing Walm's Well spring head facility. A delivery pipeline would then be laid in a giant loop to the west, connecting to the existing bottling works pipeline adjacent to the Primeswell with a new valve chamber.  Despite Walm's Well always having been a prolific source, one or two local residents vociferously complained and campaigned that taking extra water would be 'bleeding the Hills dry'.[16] As a result Coca Cola Enterprises, withdrew its planning application.[17] This action was to have dire consequences longer term, as will be shown elsewhere. 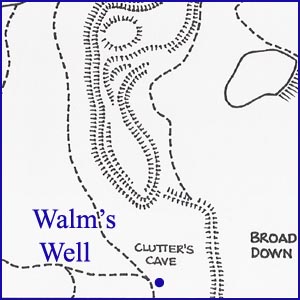