Location: opposite British Camp car park by the roadside.
Description: a dry spout on a pillar behind a railing.

In the summer of 1871 a 17-acre piece of 'Thirds Land'[1] containing a valuable spring at Winds Point was for sale. The reclusive inventor Captain Johnson built a house in a quarry here that later became the home of Jenny Lind, often known as the "Swedish Nightingale". One of the most highly regarded singers of the 19th century; she lived at Winds Point from 1883 until she died on November 2, 1887 from cancer. She was buried in the Great Malvern Cemetery. Her last formal engagement was on the 23 July 1883 when she sang at the new Royal Malvern Spa in West Malvern, to raise money for the Railway Servants' Benevolent Fund. 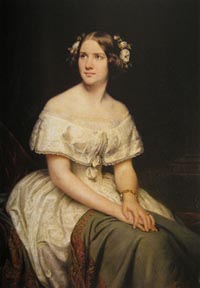 The spout was erected in 1916 following a request to Winds Point owner George Cadbury from Mr Sidney Hart of Eastnor for a fountain at British Camp where he could water his horse. Mr Hart had a greengrocery business at Link Top and used his horse and dray to bring provisions from Eastnor, up the steep Chance's Pitch, and down into Malvern. The installation is confirmed in a letter dated 2nd August 1916 from George Cadbury to Mr Hart. It reads: "Dear Sir, I am very glad to find that the fountain placed outside Winds Point has been helpful to you. We know the water to be good and pure. Such a note as yours is helpful, and encourages one to do more work of the same kind."[2]

There are two wells at Winds Point. One in the cellar is about twenty feet deep and is disused. The other is about twenty five feet deep and lies in the shrubbery to the right hand side of the main entrance. In 1956 it was described as "a roadside supply of water in first class condition".[3] The caretaker confirmed in 2006 that the spring was still the main water source for the house and mains water was only used as backup. This same spring also once fed the roadside spout.

In the late 20th century damage caused by a fallen tree on the railings had resulted in the Winds Point spout structure being fractured. Subsequently assistance through the Heritage Lottery/matched funding scheme has resulted in the damage being repaired. The bronze plate reads "Pure Drinking Water" but unfortunately no water is forthcoming.

Further information:
Another interesting water source nearby is at the house called Blackhill, once the home of Sir Barry Jackson and frequented during the Malvern drama festivals by, among others, Edward Elgar and George Bernard Shaw. According to Richardson (1935) a well about twenty five feet deep in the Llandovery Beds proved of limited value and an alternative source was developed by sinking a well in the similar beds located in a meadow on the west side of the main road.

Footnotes:
[1] In 1629 Charles I accepted 3,000 acres of land in Malvern Chase in exchange for relinquishing his forest rights. The acres constituted one third of the entire Chase, and were consequently known as the 'royal third' or 'thirds land'.
[2] We are most grateful to Sylvia Hart for allowing us to use this previously unpublished letter.
[3] Malvern Gazette, 19 October 1956. 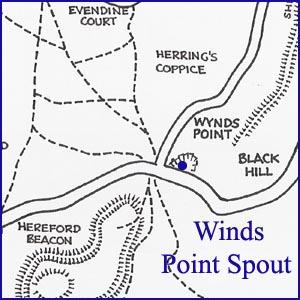