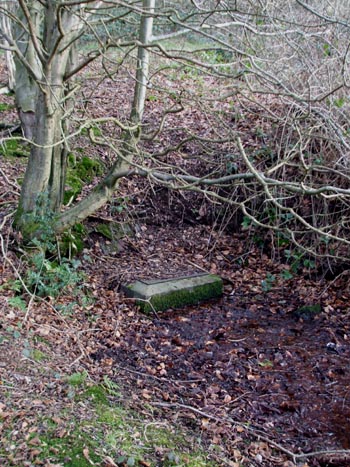 Gardiner's Common and quarry are said to be named after the Gardiner family who once worked the quarry to the east of the common. Labourer Thomas Gardiner was born in Colwall in 1824 and for many years lived in Harper's Cottage with his wife Mary, who was usually known as Molly. Harper's Cottage stood on the edge of the common in Brand Lodge Road, which was improved in 1887 and renamed Jubilee Drive. It was not until Thomas had passed retirement age that he set himself up as a self-employed quarryman, taking stone from the hillside opposite the cottage and using the new road to transport his heavy loads wherever they needed to go. He was still working as a quarryman at the grand old age of 77. Thomas died c.1910 and Molly lived on alone at Harper's Cottage for almost another decade. The quarrying business was taken over by their son, George, who was born in 1865, a surprise delivery for his ageing mother, who was then approaching 40. There were scores of quarries on the hills ranging from tiny to huge and the amount of stone taken varied from year to year. For the year 1915 to 1916 George took 1057 cu. yards from his quarry, and he probably took about that quantity every year.

Gardiner's Spring - Gardiner's Spring was described in September 1892 as being an unenclosed, natural well on the common near the south end of Jubilee Drive 'and a little below it'. Richardson (1935) identifies a fault spring at the northern end of the common and this appears to be within the iron manhole. Today the houses around the edge of Gardiner's Common are connected to the mains water supply, but imagine living here before that happened. Where did people get their water from? How did they keep it clean? Did they keep it clean?

In September 1892 Molly Gardiner made a complaint to the Malvern Hills Conservators. She said that she and the sheep had used the spring on the common for donkeys years. But now, she said, dogs had started using it and were getting into the water when they were drinking it and polluting it. She said she wanted the water to be protected from the pollution but at the same time wanted some water made available for the animals. The Malvern Advertiser of Oct 15 1892 indicates that "It was resolved to carry out, at an estimated cost of 1 pound, an improvement at Gardiner's Spring, West Malvern, suggested by the ranger". The conservators' ranger had proposed a new, protective oak covering costing 1 pound, which was was put over the spring.

Everything flowed smoothly until the arrival on Gardiner's Common of two gipsy camps in December 1910. They came throughout the year, every year. The assistant ranger always had great difficulty moving them on and often needed the help of Colwall's police constable. This time the gipsies were told to move on but George Hodgkiss said he couldn't because of his wife's confinement. On the 23rd December his 'wife' was caught begging and the ranger found Mr Hodgkiss drunk at the Wyche. He ordered them to move on but received only abusive language from the inebriate. The following day Mrs Hodgkiss was ill, and on 28th December the doctor confirmed that she was still unfit to travel. Peter O'Shea and George Hodgkiss were finally taken to court at Ledbury and fined 5 shillings with 8 shillings costs. They left the Common on 5th January leaving it in a filthy state. The assistant ranger calculated that the rags, glass bottles and tins would fill two wheelbarrows. Added to that Mr Gardiner complained that the gipsies had washed their dirty pots and pans in the Gardiner's Common well, which was their domestic water supply, so the assistant ranger advised that a lid should be made.

In July 1915 the spring water was only one inch from the top of the oak frame, but nothing was done to protect the spring until November 1934, when the conservators agreed that in the public interest it needed to be safeguarded. The ranger installed a new cement tank with an iron cover at the spring head and the overflow was conveyed to an open cement trough like the one the Conservators had put near Brand Lodge. The following January the ranger was also instructed to seal down the tank's iron cover.

July 1936 saw a new guest house, Long Mynde, built below the spring. The owner, Mr Bury, had a right to the overflow from the spring, which flowed into the stone trough. To protect the water from pollution he covered the trough with a wooden board and a large piece of stone. The ranger removed them. Mr Bury replaced them. The ranger told him not to, and removed them. Mr Bury replaced them with a board and two roof slates. This skirmish is an indication of how important the natural springs were to householders before the existence of mains water supplies, and how protective they were. Eventually a protective slab was put over the trough.


Eventually a protective slab was put over the trough but for some unaccountable reason in 1950 Conservator Mr Ewart Ballard broke open the spring and the slab on the trough, and dug up much of the ground, which polluted the water with oil. Following the receipt of a letter from Mr Bury's solicitor, Ballard was reprimanded.

By 1955 there was a danger of surface water creeping into the tank. The owner of Longmynde was given permission to raise the edge of the tank by enclosing the spring with two courses of bricks and putting a strong manhole cover over it. In September 1961 a water main was laid to Gardiner's Common and Gardiner's Spring was no longer the life support it had formerly been.

Today the trough has gone, the spring is contained under a manhole cover.

Illustrations:
1. Gardiner's Spring was once much-used by local families and gipsies, sheep and dogs.

Further information:
Gardiner's Quarry and Common are said to be named after the Gardiner family who once worked the quarry to the east of the common. They came from nearby Coddington, settling on the Malvern Hills circa 1800. One male member of the family emigrated to Australia in 1865 but later returned to work the quarry single handed. Stone from the quarry was used to build Colwall Church and probably Jubilee Drive. The foundations of Molly Gardiners' cottage could still be seen in 1988 on the Common near The Kettle Sings Cafe.[1]

In March 1960 Dr Rowe of Perrycroft was given permission to put a tank on Conservators' land, connect it to the spring, and pipe water under the road to Perrycroft, so long as his work did not interfere with the supply to the other users. Perrycroft, which was designed by Voysey, has three shallow wells. One is near the Lodge, the second about 100 yards south west of the house and the third about 400 yards south south east of the house close to the west side of the road. 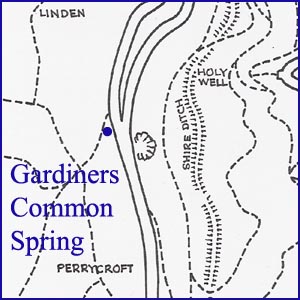