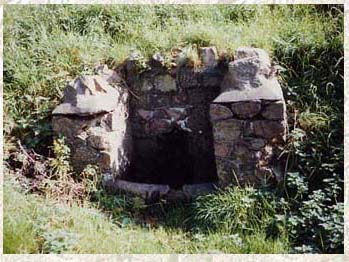 Location: B4218 Walwyn Road, 300 metres south of the Wyche Spout and the Wyche Cutting.
Description: an iron spout set in a Malvern stone surround with water slowly flowing into a basin.

This attractive little source easily goes unnoticed yet is one of Malvern's ancient springs. The spring emanates from the Western Boundary fault [1] and flows into a Malvern stone trough at an estimated modest two million litres per annum. The spring water was taken internally by the nineteenth century hydropathic patients during their perambulations of the hills, and the climb from Malvern to the spring was probably as important as the drinking for the patients wellbeing.

Access to the Willow Spring was via a narrow path running from Jubilee Drive and this was the route local householders took to collect their water. In 1905 local man Philip Powell asked permission to improve the path because it was so narrow that it was difficult for the householders to carry the full vessels up the path. (8 Feb 1905) Years later, in the mid 1950s the path was again a cause for concern. In their report on the state of eighteen of Malvern Springs and Wells, the Footpaths Society reported that the Willow Spring was receiving attention from the Malvern Hills Conservators and would be put in order shortly.[2]

In July 1941 Colwall Parish Council suggested that the spout should be moved further down the road towards Colwall. But this was wartime and by September 1945 nothing had been done. Six years later the spring had a complete facelift. In 1947 Messrs W. James estimated that rebuilding the Willow Spring in Malvern stone, semi-circular in shape, 5 feet wide and 5 feet high in the centre with the top sloping down at either side, the spout extended to empty into the existing drain. (13 Jan 1947) Colwall Parish Council agreed to pay 21 pounds and the Conservators made up the difference. [3] The work began in January 1949 - and cost fifty pounds. The work was carried out, albeit rather more utilitarian than originally envisaged and this is what can be seen today. For many years the spring was the sole supply to the houses in the vicinity until mains water was laid on in the 1950s.

Two willow trees were apparently planted adjacent to the spout in 2007 as part of a restoration programme aided by the Heritage Lottery Fund and matched funding and supervised by the Malvern Hills AONB. However when we looked in 2009 there was no sign of them. An Ash tree was however doing well above the spring. 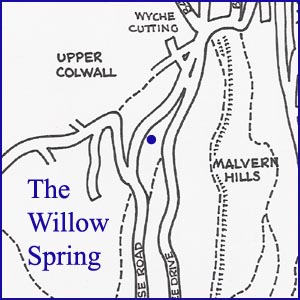