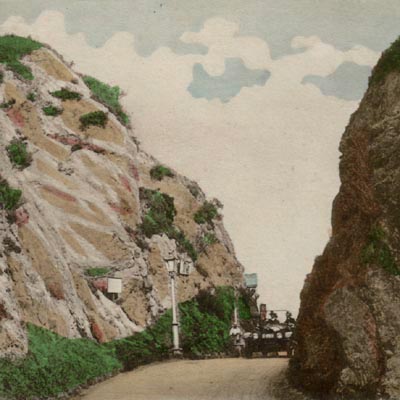 The Wyche Cutting is the ancient salt way over the Malvern Hills and remains an important road link connecting each side of the hills. The spring has played an important role in the history of The Wyche, being the only water supply at such a high elevation. In times of drought Wyche residents resorted to the Willow Spring before the public mains were laid c.1913 [1] though the local newspapers reported that the Council also carted water from the Hayslad Spring to the Wyche.

When Highland Cottage, at the entrance to the Wyche Cutting, was put up for sale in 1865, the sale particulars boasted 'excellent Water, from a never-failing spring...'[2] The cottage was probably one of many cottages and beerhouses erected on both sides of the Wyche Cutting between 1850 and 1865 for the hordes of railway and quarry workers coming to the area. It was almost certainly for their benefit that, three years later, on 9th July 1868, at 6pm, 140 inhabitants sat down to tea at the Wyche Institution to celebrate the opening of this new drinking fountain near the cottage. The fountain was built on the spoil heap from the 1836 widening of the Wyche Cutting after local lady Mrs Seton Karr had initiated a collection to provide the new facility. The water was conveyed to the spout from Highland Cottage Spring through a 3/4 inch pipe 456 feet long, and the surplus water ran over the basin and collected in a 400 gallon storage tank a few yards away for the use of the local people.[3] The total cost was 48 pounds 9 shillings and 11 1/2 pence.

For many years there were two tanks at the Wyche but in 1887 neither was in good working order and the residents had to trek down to the Hay Slad and Willow Spring for water. There were also problems with resident Mr Baker tampering with the tanks. In the 1880s he built Brockhill Lodge, next to the tump, and put in a new tank near his front gate. The flow of soap suds from the cottages higher up formerly ran to waste along a ditch and Mr Baker, in his fiddling around, managed to divert the soap suds into the public drinking water tank and someone else had to sort out the mess. Then one day in September 1889 Mr Baker took all the spare water running from the tank so there was no overflow for everyone else. A little later he complained that the water at the tank was stinking - a problem he himself had caused after he had diverted the water from the tank to flush his water closets. The smell from his closets was seeping back up the pipe into the tank! Until the Council laid water on c.1913 all except one or 2 cottages near the Wyche got their water from this public tank.

An animal trough was also provided but by the late nineteenth century it was useless. At a yard deep it was too deep for animals to reach the water, so in 1893 a shallow open trough was installed at the foot of the embankment.

The spout was described as flowing in 1988, although it was dry in November 1992, a very wet month.[4] It was reputedly closed due to contamination - sometime between 1988 and 1992 when it displayed a notice from the Environmental Health Dept. declaring it unfit for drinking. The metal cup and chain that were there in the 1940s have also long gone.

Richardson records this spring as an Archaean Spring and not associated with a geological fault, and that the water is collected in a cement well in the Wyche cutting below Highland Cottage before being piped to the spout. In the Wells & Springs of Herefordshire he says before the Council laid water on c.1913 all except one or 2 cottages near the Wyche got their water from here.[5]

The Wyche Spout is one of the few natural water sources to have been decoratively dressed, certainly in the 1960s/70s. The site was well dressed occasionally until the 1970s and the last known time was July 1978 by local newsagent Mrs Amhurst, who created a large panel of flower petals in the Derbyshire style, headed "He Giveth Water".[6] The annual well dressing celebrations were revived in 1993 and continue to this day.

On the north side in the Wyche Cutting is a further well collecting water from a Pre-Cambrian fault. A private supply once went to Mr Grundy's bakehouse at the Upper Wyche post office on the eastern side.[5] 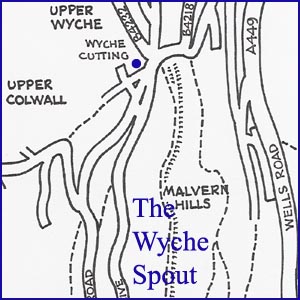