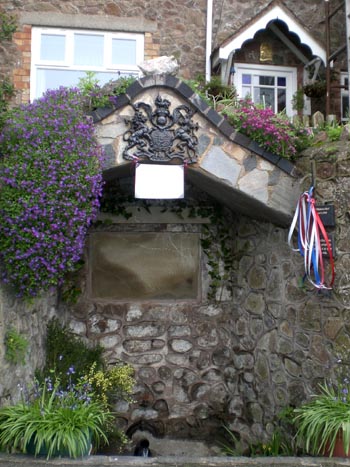 Location: on the West Malvern Road about 300m north of the Wyche Cutting.

Description: a spout by the roadside, recently restored; a well and underground cistern in the cottage behind, 872 feet above sea level; there is a Victorian wall mounted letter box adjacent to the spout.

The Ryland Story - The public spout was the gift in 1870 of William Hawkes Ryland (1821-1901) in commemoration of his recovery from the threshold of death. Born in Birmingham, William Ryland was the son of Charles Ryland and Mary Hawkes. As a young man he became a goldsmith in the city of his birth, employing at one time two men and five boys and making a mint. By 1871 he had become a 'landowner and commissioner' living in Bewdley, and of that beautiful town he became mayor in 1868. The following year Ryland came to Malvern seeking a cure for his consumption. He tried various hydropathic establishments on the east side of the hill but his health worsened and his doctor suggested he return home and write his will.

However, Ryland met an old gentleman who advised him to try the fresh air and pure water at West Malvern. Ryland took up residence at a cottage there and drank the local spring water. Before long he felt much improved and tried to buy the source of the water, but the local people kept its location secret. Ryland thought it was under old Jenkins' cottage which, after some difficulty, he managed to buy with his extraordinary wealth. The cottage, one of "a rugged rookery... of dilapidated cottages" later became part of the Royal Spa Estate. Its secret source was St Thomas's Spring.

As owner of the spring Ryland let the local people use some of the water but kept most of it for himself so that he could have uninterrupted use until his health returned. The local people were angry, in particular Colwall residents who traditionally collected water from the spring, and they burned down one of the cottages to teach him a lesson.[1]

The local people continued to demand that he let them have the water and so he provided a new roadside fountain which was supplied by 'a new and very copious spring, not long since discovered at West Malvern...'[2] The plaque in the brickwork reads 'This fountain of pure water and tank is the sole gift of W H Ryland of Bewdley to the inhabitants of this neighbourhood and the public 1870. Waste not want not.' With dignified ceremony it was opened in July 1870 by Ryland's daughter Mary Martha.

Designated `Royal' - There are two stories of how the well achieved its 'Royal' prefix. Firstly, by the express permission of Queen Victoria. The story is that her daughter Helena (1846-1923, married Prince Christian of Schleswig- Holstein) came to Malvern in July 1870 with her husband and stayed for six weeks at the Foley Hotel. During their stay she visited West Malvern and accepted a glass of water from a lady living in a cottage at Royal Well, and this incident led to the designation 'Royal'.[3] Secondly, it is said that Ryland named the fountain Royal Malvern Well 'in grateful acknowledgment of a munificent donation of our beloved Queen to Mr. Ryland, to assist him in his praiseworthy efforts to build schools at Bewdley.'[4]

The Royal Malvern Well-Decorating - From 1870 well-decorating became an annual event since: "The cottagers in the vicinity, out of gratitude for his kindness, determined to decorate the fountain once a year with flowers, ...to celebrate ...the presentation of the Royal Malvern Well for the use of the public forever."[5] The 1871 well-decorating included banners and floral arches, garlands of leaves and red and white roses - so many that the spout could hardly be seen. The 1875 anniversary was celebrated "by dressing the fountain with copious garlands of flowers and evergreens, and by taking tea together in each other's cottages".[6] Two years later the well was decorated in the Derbyshire manner, a flower show opened at 2 pm, there was music, and during the afternoon there was a tea for 200-300 people. The organisers were expecting a grand turnout in the knowledge that Great Malvern offered no alternative attractions and certainly no flower shows - in fact, Great Malvern offered nothing at all! Mr Ryland liked to attend every year and would distribute the prizes for the flower show and attend the afternoon tea parties and the evening concerts.

On a perambulation of many of the springs and wells in October 1956, The Malvern Public Rights and Footpaths Society noted that this one was not running. In 1970 the spout's surround suffered major devastation when Ledbury Rural District Council decided to demolish the stonework in order to 'make it safe'. The original coat of arms was lost and the plaque went missing.[7] The Friends of Malvern (which later became Malvern Civic Society) sprang into protective action, but the repair was not a patch on the original edifice.

In 1996 the water at the spout was tested for coliforms and chemical analysis and was found to comply with the requirements of The Water Supply (Water Quality) Regulations 1989.[8] By the end of the twentieth century Ryland's spout, which had formerly flowed copiously, was blocked. Nevertheless the water feature enjoyed a restoration in the early years of the twenty-first century when it became the subject of the Heritage Lottery Fund/matched funding scheme. The basin was improved, and a new stone plaque and coat of arms were added. The mindful owners of the cottage behind the spout reinstated the flow and their efforts were recognised in 2009 when the site received the St Werstan Award.[9]

Today the spout is annually decorated for the well-decorating celebrations. 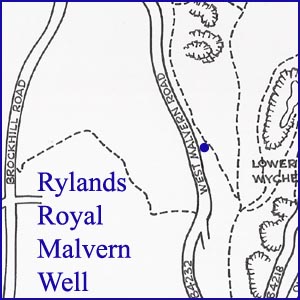