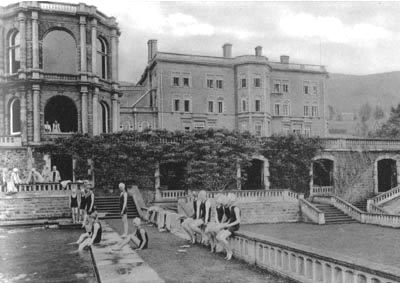 Location: Garden features and swimming pool in the grounds of St James' House.
Description: Originally one of Malvern's stately homes and, later, a school.
The history of St James' House is closely linked to its prolific supply of Malvern spring water. Lady de Walden, Lucy Joan Cavendish-Bentinck was the widow of the 6th Lord Howard de Walden. She built de Walden House together with de Walden Lodge in Eastbourne, Sussex, during the 19th century. This locality benefited from the services and water supply from the Eastbourne Waterworks Company as a result of an 1859 Act of Parliament. All was well until the Water Company demanded thirty pounds from Lady de Walden. Lady de Walden considered this demand was out of order and responded by sinking a well in her garden at the cost of one thousand pounds. This was not the end of the matter however because in 1889 she moved to another of her houses, this time in West Malvern. Here a prolific supply of spring water existed that she could utilise to realise her dream house and landscape, unencumbered by the machinations of the Eastbourne water deficiency and bureaucracy.[5] 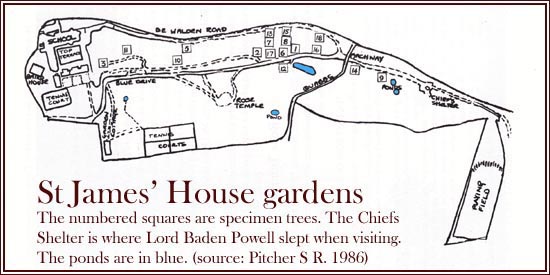 Map of the grounds showing the extensive water gardens. [6]
St James' House was modestly built c.1860 but, at the then phenomenal cost of one hundred thousand pounds, Lucy, Dowager Lady Howard de Walden had the house transformed in 1891 into this vast mansion. It was set in a 283 acre estate whose gardens, terraces, pools and bridges required 70 men to maintain. The pools and a variety of other domestic facilities utilised the plentiful supply of water from Westminster Bank springs. The house was owned by the de Walden family from c.1891 - 1900.

Lady Howard de Walden was both a local and national benefactor. She paid for a carriageway over the Malvern Hills from St Ann's Well to West Malvern; she paid for walks to the Beacon and to Sugar Loaf Hill and 10,000 pounds for the building of the Dental Hospital and College in Great Portland Street, London, which was opened in February 1894.[1] In 1896 she generously paid half of the Conservators' 530 pounds costs after they failed in their petition against a clause in the Malvern Link (Extension and Water) Bill enabling water from the Hayslad and Dingle Springs to be diverted to the new mains, depriving the local people of their rights.[2]

Lady Howard de Walden died on 29 July 1899 aged 92. St James's House, which she had built eight years earlier for 100,000 pounds, was left to her son, Hon.Evelyn Ellis, who quickly put it on the market. During a week in May 1900 the lavish - and often unique - contents were auctioned separately in 1,100 lots, fetching a tiny fraction of their original price. The mansion, which had 21 bedrooms, was bought by the Ballard family of Colwall for just 30,000 pounds.[3] Ballards hoped that the Government of the day would use it as a convalescent home, capitalising on the healthy climate. They also wanted access to the plentiful water supply. The convalescent home did not materialise and Ballards leased St James' to Alice Baird for a school in 1902. The gardens had been described in the sale particulars as containing the finest collection of flowering shrubs in the kingdom, beautifully intersected by Terraces and Grass Walks, Ornamental Ponds and Fountains, stone-built Summerhouses, Herbaceous and Rose Walks, Italian Terraces, covered Arcades and Tea Pavilion, Water Lily Pond, Rockeries, Shrubberies, Steep Ravines and Flower Borders. It also had an engine house for supplementary water supply.[6]


St James's mansion thus became a girls' school, and remained a school until 2006. The estate was bought in 2007 by the Elim Pentecostal Church. The new Elim International Centre accommodates both Elim's offices and college in the same building.

Ms. Baird was the legendary headmistress of St James's girls school and her reign is chronicled in her book 'I Was There'.[4] The swimming baths is recorded as opening Saturday 12 June 1926 by surgeon Sir Alfred Fripp of Guy's Hospital. The pool and the shower baths were supplied by spring water and during World War II the eighteen shower baths at the girls school, at the request of the District Council, were made available for troops in transit through Malvern. The Victorian gardens were a particular attribute of the school with terraces, stairways, temples, grass walks and of course the dripping streams from the hillside. This landscape was seen as a return to the Augustan age with grounds laid out by Capability Brown, albeit the 70 gardeners largely replaced by the Atco mower. An important event of the school year was the emptying of the five ponds before the start of the Autumn Term. During the war, when the cycle was broken, silt built up which eventually had to be dug out. The role of Malvern spring water in the school life was deeply embedded, even to the extent of drinking the sparkling water to refresh during the energetic daily activities. One of the reasons that Stephen Ballard had purchased St James's in the first place was to secure a water supply from the gardens for his Model Farm. Ms Baird had leased the property from Stephen Ballard from 1902 but it was not until 1924 that an outright purchase was agreed. Ms. Alice Baird retired as headmistress in 1948.

In the 1920s the direct spring water supply to the College for drinking was discontinued but retained for other uses. The mains water at that time was also spring water. Later, in the 1980s the supply was renovated for uses other than drinking water. 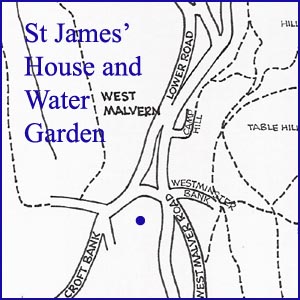