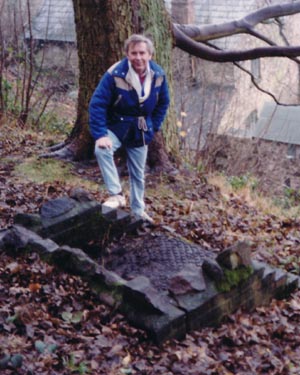 Location: on the hill at the rear of 151 West Malvern Road and the valley sloping westwards from between End Hill and Table Hill.
Description: an underground chamber reached by a deep shaft at the head of the valley and springs in the valley below.

This source was once known as the Damoiselle Spring and fed water to a local water cure and bathing establishment.[1]

Access to the spring is by means of a deep shaft giving entry to an underground chamber. The iron cover to the shaft lies in a brick and stone surround alongside a contour path behind number 151 Folly Cottage, formerly Danzell Cottage, which is believed to be an old cider house.[2]

The water was used freely by the local inhabitants from the 1820s until it was contained for public supply under the Malvern Link (Extension and Water) Act of 1896.[3] In December 1898 the Surveyor, Mr Maybury, produced for the Council his plans for the better collection and distribution of the Danzell Spring. It became clear to the local people with an interest in the spring that their water rights would be interfered with as a result of the work and they met to consider claims for compensation.[4] Clause 49 of the Malvern Link Water Act of 1896 specified that the District Council 'must not sink any well, or construct any works for the purpose of abstracting underground water' and 45 owners and tenants signed a petition claiming free water if the Danzell Spring was diverted. They also asked for a new tank to replace the existing one, which was on private ground, and that any surplus water should be for public use. In return the Council could sink a tunnel for water.

The Council soon found underground water and, having done so, claimed that it was not from the Danzell Spring so the owners were not entitled to compensation. The owners were furious. Having had free water for 75 years the Council had taken the supply into the mains and left them none. They challenged the Council; the argument was debated; it was decided to allow compensation of 15 gallons per head per day reckoning on 5 members per household.[5] Later the Council maintained that Earl Beauchamp, who owned the nearby Birches Farm, was the only owner allowed compensation from the Danzell Spring.[6] So the controversy raged on until, under an agreement dated March 1905, local residents were awarded the right to receive water at a rate of 9d per 1000 gallons in perpetuity.

The water has supplied the public main and serviced an area from Ebrington Road junction, West Malvern to the North Malvern Reservoir above Clock Tower. A bulk water meter, located on the footpath above Ebrington Road junction, formerly recorded the output from the spring. The meter has now been removed and the Danzell spring has run into the collector main since c.1970.

Between the old Methodist Church (number 139) and the old Bath House (number 141) is a substantial outfall from the Danzell Spring, which used to feed the Bath House. There is a further outflow below, on the downhill side of the West Malvern Road that provides water for a water garden in the garden of Ryecroft House, formerly the fire station.

Nearby a spout is reported to have once existed in the Y of the road junction between Old Hollow Road and West Malvern Road, near The Lamb public house.

Illustrations:
1. Bruce at the Danzell chamber access in the 1990s.
2. Ryecroft House outflow and water garden. 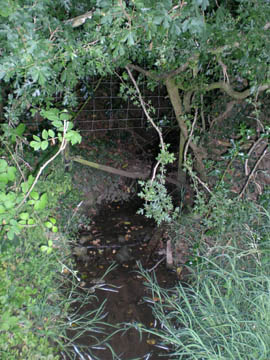 A survey of a large parcel of land on the north Malvern Hills, dated 1732, gives abuttals or boundaries. The area in question included Table Hill, North Hill and End Hill.(1) The parcel originated as the 'King's Thirds,' that were enclosed in about 1632 on the disafforestation of Malvern Chace.  They came into the ownership of the Hornyold Family in 1768.(2) The western abuttal would border with the built-up area of West Malvern north of the junction with Westminster Bank. It mentions the lost name of Waumswell but where exactly was it?
Picture right - water still flows from the Home Spout Meadow springs into the contour leet
Checking Bruce Osborne and Cora Weavers book on the springs of the Malvern Hills, I could only find one in the vicinity, no 28, Danzell Spring (Map 3). This name can only be traced back to the nineteenth century.(3) Another Waumswell (Walm's Well) is better known, but it is situated some distance away near Clutter's Cave  and south of the British Camp in Ledbury Parish (no 58, Map 6).  I wondered if Waumswell could have been an earlier name of Danzell Spring and began to investigate.

The large scale OS maps are extremely useful and all versions record immediately below and west of Lower Road. West Malvern  -  'Walmspout Coppice'. The current A-Z Street Atlas also. This was promising as 'Waum' or 'Walm' is derived from the Old English wielm, meaning that which seethes or surges, a fount, upwelling or spring. 'Walmspout' was identified many decades ago as derived from wielm and it was noted that the earliest reference dated back to the thirteenth century.
In c.1275-80  a 'Stephano de la Welme'  was recorded in  Mathon parish as paying the lay subsidy tax.  This suggested that there was a place or area of  Mathon called Welme associated with a well or spring.(4) In fact, a probable descendant was recorded in 1327 as 'Stephano atte Well'.(5)
The next reference that I could find, confirmed the continuing existence of a place named after the well. In 1648 a parcel of ground that belonged to Croft Farm, Mathon, was described as having land to the north called Walmes.(6) The parcel in question has been located at the corner of Croft Bank and Mathon Road and would therefore have Walmes in roughly the area required.  Much of Mathon belonged to Westminster Abbey after the Dissolution of the monasteries, including Croft Farm. The latter name is of recent origin and in copyhold leases of the farm it  was recorded as made up of messuages (houses) and land called  Walmes, and  Mitchells and Gumbidge.(7) The name Walmes appear in court records from 1701 to 1803 after which the farm was called the Croft estate.(8)  A 1798 plan of Croft Farm records two fields, the already familiar 'Worm Spout Coppice' and, immediately south, - 'Worm Spout'.(9) The latter field has several springs within it today and is better known for the rifle range that occupied it from at least 1871 until 1969.(10) The Malvern Advertiser 4 February 1860 announced THE RIFLE CORPS MEETING was held to introduce the new captain, Sir Henry Lambert. The news item mentioned the 'foggy nature of the atmosphere' of the shooting range, which was 'ground at the back of North Hill'. (See also Malvern Advertiser (7 April 1860). On the 1840 tithe map for Mathon the fields are called 'Home Spout Coppice' and 'Home Spout Meadow'.

The present Danzell Spring is situated a short distance behind and above Danzell Cottage and its water would have flowed into the field 'Worm Spout (Meadow)' below. The exact position of the original Walmswell is likely close to Danzell Cottage as this is located on the boundary of the former Hornyold land on End Hill and Table Hill (see abuttal above). This water supplied the growing village of West Malvern and became a matter of much dispute with local residents when the Council diverted their free water into the public main.(11) 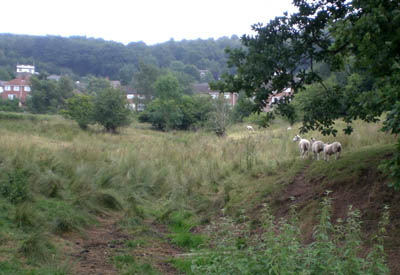 Home Spout Meadow looking towards the Danzell Spring
It is interesting to note that as the English language of the Anglo Saxon period developed into Middle English that the meaning of wielm was forgotten and the suffix 'well' needed to be attached, effectively creating the name 'Well-well'. Today the waters of the Waumswell(s) flow into what remains of a contour leet at the foot of the Home Spout Meadow towards Birches Farm. Here we can speculate that the leet was integral with the early activities of the farm, perhaps using the water power to turn machinery. This use would have diminished when the Danzell spring was dug and the water volume was intercepted for the public main. 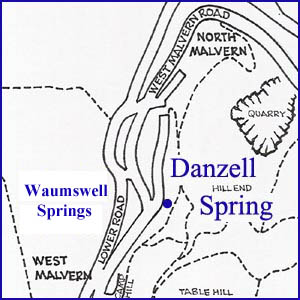