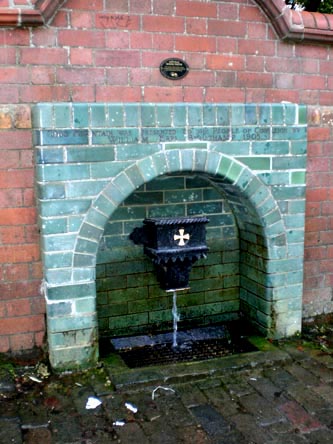 Location: north-north-east of Malvern on Cowleigh Road (B4219)
Description: spout with green brick surround, set in a terracotta wall

This spout, formerly known as the Cowleigh Spout, is on the left as you leave Malvern on the Cowleigh Road, almost opposite the Worcestershire Way car park. The springs are in an adjacent field and their daily output is 10,000 gallons, with much running to waste. Unlike many of the other natural water sources of the Malverns, Cowleigh Spout maintained a healthy flow even during times of severe drought, such as that in 1921, and on many occasions was the sole supply over an extensive area.[1] During the construction of the North Malvern Tank in the 1870s, when the supply from the Morris tank was cut off, the inhabitants walked the half mile from North Malvern to this spout for their household's water.

This rural idyll was witness to the 'dirty' hordes of Birmingham hop-pickers who flocked to the countryside for their annual working holiday. "Cowleigh Spring was the resort of many hoppers on Sunday, the "crystal streams" being freely used for their ablutions. They borrowed a piece of soap and had a "wash and brush up, the pocket handkerchief doing service as a towel".[2]

The original spout was replaced with this one by the 7th Earl Beauchamp. He was later immortalised as Lord Marchmain in Evelyn Waugh's Brideshead Revisited. The wording on the tiled surround reads: "This fountain was presented to the people of Cowleigh by William Earl Beauchamp 1905." The Earls Beauchamp lived at Madresfield Court, three miles away on the opposite side of the hills, and the cisterns behind the fountain originally supplied the Court, four farms and a dozen houses on the Madresfield estate. The spout fed a tank on Cowleigh Park Farm.

In the 1870s, a three-inch iron main was laid to Madresfield via Dyson Perrins School, Tanhouse Lane and Newland and a 30,000-gallon reservoir/header tank at Lower Woodsfield Farm enabled the supply thereafter to be gravity fed. The laying of the supply is recorded in the local paper of 7 Dec.1872, titled `New water supply to Madresfield Court': "For some time past, the route between Madresfield Court...and the famous flow of water at the entrance to `Cowleigh Park', known as `Cowleigh Spout' has exhibited a line of excavation, in which mains have been deposited for the conveyance of the overflow of water at the spout for use at Madresfield Court. The work is now all but completed."[3] The village was put on to the main public supply shortly after 1955 following concern about possible contamination.

A sample analysed during the 1980s suggested a similar composition to the Schweppes Pewtriss Well. The tanks behind still overflow copiously and are maintained because they supply several local households with water.

In 1995 water was reinstated at the public spout as a result of the efforts of local enthusiasts. Since then the area around the spout has been the subject of various initiatives to make the area more user friendly in recent years. There are now steps from the car park at the rear, which once housed the bottling works tank. Also the area in front of the spout has been restored and drainage improved.
The Madresfield Estates Trust still owns about 50 acres of land behind the spout together with the nearby Cowleigh Wood, but at some time in the past the ownership of the spout changed. In 2007 the Area of Outstanding Natural Beauty managers when implementing the Heritage Lottery Fund enhancements unsuccessfully tried to trace the owners of this fountain. What they did discover was that the properties across the road from the fountain had a right to the water and in the case of The Byre it was a gift in perpetuity from the Beauchamp estate for bravery in the Great War.

Illustrations:
1. The Spout after renovation 2009.
2. Well decorating, this site is regularly dressed for the annual celebrations. 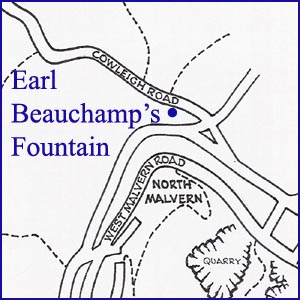 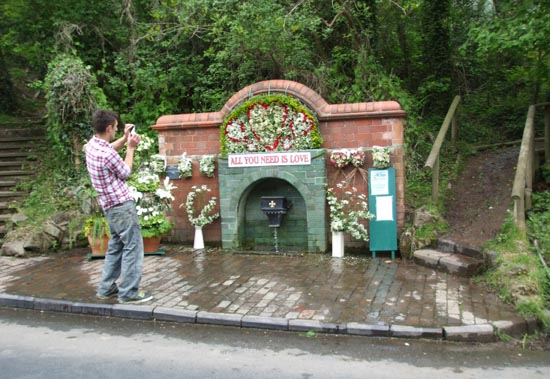