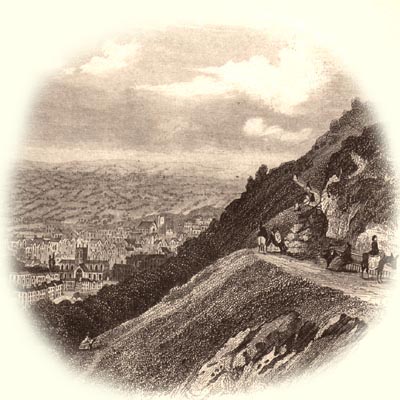 Location: There are three sites which may be linked,
i. Holly Mount Spout 576 feet above sea level.
ii. Ivy Scar Spring
iii A spring beneath Queen's Drive
Description: there is nothing visible of the latter but the second spout survives as the nineteenth century brickwork niche, now in a private garden of a modern house. Ivy Scar Spring is contained but the course of the original streamway can be seen.

Holly Mount Estate was a piece of former Thirds Land. In exchange for giving up his hunting rights, Charles I accepted 3,000 acres of Malvern Chase, which was eventually sold to different landowners. The acres were one third of the Chase and these plots of land are known as Thirds Land. The house Holly Mount was built on the estate c.1820, possibly for wealthy Thomas Woodyatt and is where, in 1830, the young Princess Victorian and her mother stayed. This once magnificent house was demolished and for many years Holly Mount Fountain lay neglected and forlorn. In the second half of the twentieth century the site was developed with new houses and the fountain was rediscovered. The small spout sits in a niche in a wall, today making it an attractive garden feature where once it might have been a practical aid to householders and servants before the age of water mains and public supply. Most of the time it is dry but gushes unpredictably from time to time.

There was reputedly a cave in the grounds of Holly Mount House. One hyposthesis was that "Nine o' Clock Cave" as it was known, was linked to Clutters Cave and the tumulus on Pinnacle Hill to form a prehistoric astonomical observatory.[1] More likely it was the cave where St Werstan, the founding monk of Malvern lived in the 11th century.

The above source may be linked with the Ivy Scar Spring that is now captured for the collector main that traverses the hills. Ivy Scar Rock lays immediately above the Holly Mount Estate and the spring was a substantial source before containment. Below and on the northern side of Ivy Scar Rock there is a streamway channel that is dry. This is believed to be the original valley head for the Ivy Scar Spring. A large oak tree about 50 yards below the path marks the channel.

There is apparently a water source in the Queen's Drive near Holly Mount Church. The exact location is beneath the road surface by the lower end of number 25, next to the church. Nothing is visible. This is believed to be part of the same water system as the above. 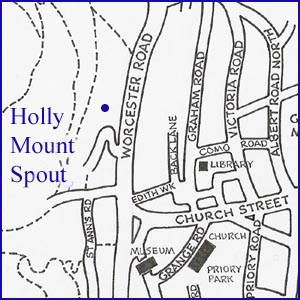