The fountain started life in the entrance lobby at the Malvern Community Hospital, Lansdowne Crescent. This charming drinking fountain dates from the time the hospital was built and equipped by wealthy local benefactor Charles Mr Dyson Perrins, of Davenham in Graham Road. The plaque above the fountain records the opening of the hospital on 29 May 1911. The porcelain basin, which was made at Morrison & Ingram's Hygeia works in Manchester and the green tiles made at the Minton China Works in Stoke on Trent, is now dry, but it is a rare delight to find original cups and chains still attached.

The Department of Health and HM Treasury approved 19.3 million pounds of capital funding in December 2007 to construct a new community hospital in Malvern. It was agreed that a new 24-bed hospital would be build at Seaford Court, in Malvern Link, with a planned opening date to the public of autumn 2010. By July 2010 engineers had already been to inspect the fountain with a view to moving it to Malvern's new hospital.

Malvern's third hospital opened in Worcester Road in December 2010. In February 2011 Cliveden Conservation of Bath carefully and skilfully removed the fountain from Lansdowne Crescent and installed it in a hospital heritage area outside the ward on the first floor of the new hospital. The basin had four hairline cracks in it, so removing it without causing more damage was particularly difficult. Six days later HRH the Princess Royal formally opened the new hospital.

Friends of Malvern Springs and Wells were balloted to consider presenting the St Werstan Award to this heritage water feature in June 2011, following the successful conservation of the drinking fountain. The award was presented in August 2011 and can now be seen mouted alongside the fountain.


Additional Information:
A horse trough outside the old hospital disappeared some years ago.

Illustrations:
1. In the Malvern Community Hospital with the St Werstan Award plaque.


2. The former hospital in Lansdown Crescent where the fountain was in the entrance foyer. 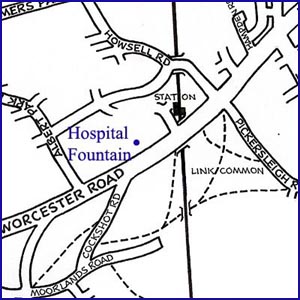