To make a purchase contact cora@malvernspa.com Alternatively you can add the titles required to your shopping basket where you can pay by PayPal or plastic. OR send the titles required, your name and address, and a cheque for the required amount payable to Cora Weaver, to 4 Hall Green, Malvern, Worcs. WR14 3QX. Books are dispatched on receipt of the order and the price includes postage and packing UK.
CLICK ON THE SHELF BELOW TO FIND YOUR SUBJECT. 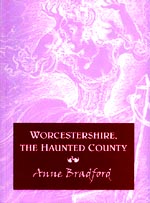 Size A5, 178 pages, fully illustrated in black and white by drawings by Zora Payne and photographs by Anne Bradford.
If you find history boring, then this is the book for you. Here is the history of Worcestershire told in over 100 true ghost stories. Most stories are only a page or two in length so there is no time to get bored. Two policemen saw a bearded man in a long cloak walk through a wall in Kidderminster - was this Richard Baxter whose statue stands over the Kidderminster ring road. A long-haired phantom has been seen in the Barley Mow in Sidbury, Worcester. Was this a Royalist from the Battle of Worcester? Builders at the Fleece in Bretforton (once a medieval long house) have had their sandwiches mysteriously thrown about - was this Lola Taplin, the last licensee who would not allow food in there? The staff have heard light footsteps and girl's voices in Forge Mill museum in Redditch - were these from the young fly dressers who once tied the feathers on the fish hooks? The Evesham Journal described the book as 'a fun way to learn history'. 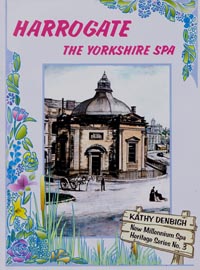 The story of Harrogate's remarkable legacy of springs and wells and the physicians and enterpeneurs who, over the centuries, turned a piece of rural Yorkshire into a famous spa town: also of the efforts now being made to reverse the post-war decline and create a new spa for the 21st century. 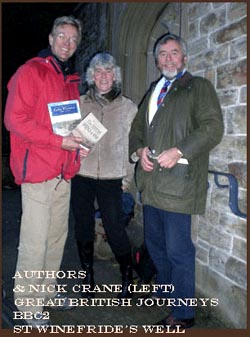 Following in the footsteps of a 17th century lady traveller, the text explores these early years of British Spas, who discovered them, promoted them and used them for what ailments. The text looks at what Celia Fiennes saw and experienced at the 23 early mineral water spas that she visited. Also recorded are the surviving artefacts enabling the reader to rediscover and appreciate these echos from the past. The perfect gift for someone wishing to explore this hidden aspect of the early science of healing. 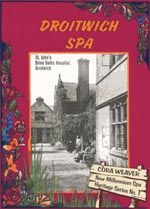 A very readable account of the history of Droitwich's saline baths from 1836 until the present day. Discover what the baths were like, how they were used and who visited them. 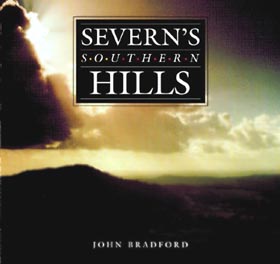 This book celebrates the beauty of the hills that lie either side of the lower river Severn between Bridgnorth and Gloucester and reveals some of their unique features, attractions and hidden secrets. The text tells something of the history and folklore of each one, mining and quarrying on Titterstone Clee hill, villages abandoned on Brown Clee Hill during mediaeval times, a battle that never was on the Abberley Hills, the village that was transformed almost overnight on the purity of its spring water into a popular spa town - Great Malvern, Winchcombe at the foot of Langley Hill, once a royal town in a lost county where Saxon kings had a mint and buried their dead in a mausoleum. Iron Age hillforts, tollhouses and milestones from the days of turnpike roads, a rebuilt railway line with steam trains, and a motor sport hill climb, all are to be found within the pages of this book. 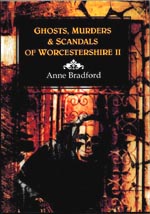 GHOSTS MURDERS AND SCANDALS OF WORCESTERSHIRE II
by Anne Bradford

A5 size, 181 pages, fully illustrated with spooky black and white photographs
The first volume of Ghosts Murders and Scandals sold out so quickly that I have produced a second volume.
Twelve months before an archeological dig discovered that Romans (or the Romano-British) had occupied a large part of Evesham, two ladies were driving down Abbey Road when they saw a centuria of Romans passing by.  In Droitwich, in 1997, two young men stock-taking late at night on the Berryhill industrial estate saw a Roman in full regalia walk across the bottom of the shop. The Chairman of the Malvern Museum Trust will not be pleased when I remind everyone that her hero, Dr James Gully, who helped to make Malvern what it is today, was, as an elderly married man, involved in a horrendous scandal with a young patient. One of the first policemen to be killed on active duty probably met his end in an election  riot at in 1857 Kidderminster.

If you are feeling depressed, this is a book shocking enough to take your mind off your troubles and cheer you up.