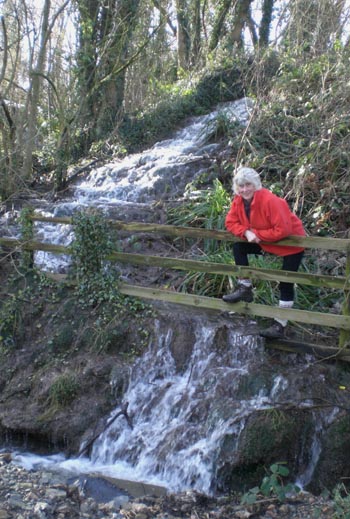 Location: between Colwall and Malvern Wells, near the railway tunnel on the east side of the hills.
Description: a substantial volume of water emerging from the eastern end of a disused railway tunnel.

Today this torrent runs to waste and is probably ignored, but there was a time when it was a vital asset to Malvern Wells, Great Malvern and Malvern Link. To find it, take the A449 (Wells Road) south from Great Malvern. At the Railway Inn turn left into Peachfield Road, then first right into King Edward's Road, then immediately left into Fruitlands. The road curves round to the right, then to the left. Immediately after Juniper Way on the right is a bridleway that runs under the railway. Walk down the bridleway to the bridge. The outfall from the spring is on the right.

This prolific spring was discovered in 1852 during the boring for the building of the first tunnel through the hills, which opened in 1861.[1] The spring is about a third of the way into the western end of the old tunnel, where the Silurian beds are faulted against the Pre Cambrian, and where hydropathist and fossil-collector Dr Ralph Grindrod found a vast array of trilobites. About a third of the way inside the tunnel was a large room with a boiler and steam engine that pumped water from the spring to a tank almost above the tunnel. The steam pump was likely a reciprocating Weir type pump rather than a rotary pump. This supplied several homes locally as compensation for springs that were lost when the tunnel was built.


During the 1890s the inhabitants of Malvern Wells were debating their water crisis; they could not decide whether to apply for a regular supply from the tunnel spring or amalgamate with Great Malvern and receive the benefits of the neighbouring town's new supply. Dr Grindrod confirmed that the tunnel supply was variable and therefore not dependable and advocated the latter course, which was later effected.[2] By the 1890s eighteen houses in Malvern Wells were supplied from the Great Western Railway's tunnel, including that of water cure doctor Charles Grindrod of `Wychside'. Quite possibly it also supplied the tenant of Craeglea, just a few doors down, Mr Edward Elgar.

In Great Malvern the Davenham Estate in Graham Road made good use of this Great Western Railway supply. The tunnel water also supplied the railway stations at Malvern Wells, Great Malvern and Malvern Link, and it fed water towers at Malvern Wells and Malvern Link bridge where steam engines could take on water. The water supply to the three Malvern stations was by 6 inch gravity main. Malvern Link Station was used for excursions with the impressive Great Malvern Station being reserved for the more exclusive patrons of the town. Malvern Wells station no longer exists. The source also supplied The Malvern Link Hotel, including its swimming pool. The hotel is illustrated in Hurle.[3] It was later a school but was demolished and replaced with a block of flats. The Imperial Hotel in Avenue Road, later the Malvern Girls' College, also had a water tower and a swimming pool fed by the spring. The Imperial Hotel also received a supply of Droitwich Brine water which was specially transported in by railway. In June 1896 'The most destructive fire that ever occurred in Malvern proper broke out...' at the Imperial Hotel, causing extensive damage estimated at ten thousand pounds. The fire brigade had the most rudimentary, hand operated equipment and the fire took hours to put out. It was agreed that the tunnel water was most effective in putting out the fire. Following this a new steam engine was acquired in July 1897 by the fire service.

Unfortunately, due to the steam locomotives taking all the oxygen in the tunnel, there was a danger that the train drivers would become unconscious, so when a new tunnel opened in 1927 the earlier tunnel closed. The little pumping station became redundant in 1927 when the second tunnel opened and the tank was abandoned in favour of mains water.

Today, near the eastern portals of the tunnels, there is a large iron tank full of tunnel water, which is believed to feed the trackside main. The main beneficiary of the tunnel water today is the golf course at Malvern Wells. A cistern by the railway bridge is still used for watering the greens, and the substantial outfall of water that emerges near the railway bridge runs across the golf course as a brook. There is also a modest spout at ground level on the northern side of the bridge.

Illustrations:
1. The main spring outfall in 2013.

High on the hills near the Wyche Cutting there is an ancient iron vent pipe thought to have been part of the ventilation system for the pumping engine. and late nineteenth century maps mark an aqueduct and tanks in the vicinity of the Link station. 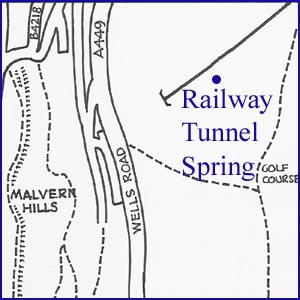