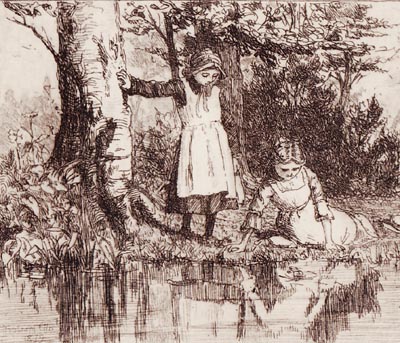 Location: near the Wyche, down Ballard's Drive, a narrow gated road on the junction of Walwyn Drive, probably in the garden of the house named Glenwood.
Description: a spring running down a bank at the rear of a garden.

This spring emerges in a private garden. It lies immediately below Moorall's Well, also known as Pitts Spring and is likely part of the same hydrological system.

One of the earliest references to a Malvern Spring is believed to refer to the Primeswell. A perambulation of the Chase was made in 1277 as a result of a dispute between the Bishop of Hereford and Gilbert de Clare, Earl of Gloucester: "The Chase of Malvern extends itself upon the Breadth in the Upper Part by the ridge of the Mountain there to Pommeswalle (sic) to Le Deodorle...etc."[1]

Confusion over location - The exact location of the original Primeswell is open to speculation. Richardson suggests that the real source is in a quarry on the eastern side of the road where it emerges from the Pre-Cambrian. From here it goes to a reservoir on the western side.[2] The Glenwood Spring rises about 150 yards further south than that supplying Glenwood House. Its average yield is 35 gallons per minute according to Richardson.


Smith identifies the Primeswell as "at the Wyche Cutting".[3] However, careful scrutiny of the 1633 map of Malvern, which Smith uses as his source, shows the original Primeswell to be nearer the location of Glenwood House and this is the basis for our estimate of its location and identification.

Stephen Ballard purchased Winnings Farm in 1849. The attraction was particularly the prolific springs that could be used as a supply to Colwall, relying on gravity to distribute the water. Glenwood House was built c.1850 by Ballards and the spring once fed an elaborate water garden but this has now gone. In the late nineteenth century a new two inch cast iron main was laid from Glenwood and reservoirs built on the south side of the main road opposite the Winnings, increasing the water supply to Colwall village.[4]

Schweppes then at Holy Well, in 1890 entered into an agreement with Ballard to take water for their planned factory at Colwall. In spite of drilling to a depth of 978 feet, only mineralized water was found at the factory site and so Schweppes resorted to Ballard for supplies of water.[5] Glenwood was the name used by Schweppes for the water used at their bottling plant at Colwall from the time it was first built in 1892 until 1929 when they took over Burrows' and started to use the Pewtriss Well. From 1892-1929 the water was supplied by Ballards but it supposedly came from the source known as Ballards Spring. More likely the waters were merged in the extensive private water supply network orchestrated by the Ballards.

From the evidence above, particularly Richardson who confirms two springs, it can be concluded that the southerly one is Glenwood/Ballards Spring and the northerly one being the original Primeswell. They are both likely from the same hydrological system and the waters combined as part of Ballard's extensive water distribution pipework and reservoirs. It may also be that the name Glenwood was used to refer to either at different times.

When the arrangement with Ballards was discontinued in 1929 in favour of the Pewtriss Well near British Camp, Schweppes felt that `Pewtriss Well' was an unsuitable name for a bottled beverage. They therefore adopted the name Primeswell for their new water, believing it to be a defunct local name. There is evidence to suggest a confusion resulting from an error on the 1919 Malvern Geological Society map (see Pewtriss Well). It is this that has caused bewilderment as to the whereabouts of the original Primeswell source which, according to Schweppes when they managed the bottling works, was just to the south of Evendine and which they believe to be dry circa 2000.

Stephen Ballard III believed the Primeswell to be in the vicinity of the Good Shepherd Church in Walwyn Road near the Willow Spring. This spring was blown up by a bomb during World War II, covering the local home guard with mud and never again functioning in the same way. 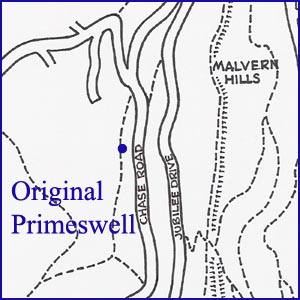