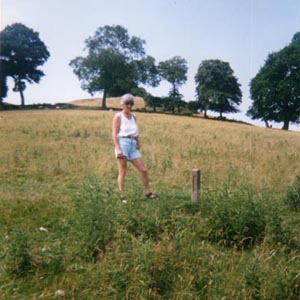 Location: a spring near Whippets Brook, off Cowleigh Road (B4219).
Description: a chamber cover in a fenced enclosure and a marker post.

To reach the spring take the Worcestershire Way, which starts almost opposite Earl Beauchamp's Spout in Cowleigh Road. The undulating path runs through an orchard to a stile. Cross the stile and to the left is a footbridge that crosses Whippets Brook. Cross the brook, keeping to the hedge on your right. Ahead in the distance are three trees and to the left of them two valleys meet. At the junction of the valleys you will see clumps of nettles, the site of the cottage known as Whippets. Follow the hedge round to your left, which follows the Worcestershire Way, and you will see the triangular enclosure of the holding tank. The source is protected by a padlocked manhole cover and is situated in the field where the cottage known as 'Whippets' once stood. The cottage was demolished several decades ago following an alleged macabre death there.

The spring itself rises about 30m uphill of the enclosure and is marked with a concrete post inscribed DRAIN. The spring is said to have served a Roman pottery because many pieces of Roman pottery have been found nearby, but this has not been confirmed.

In the early 1990s Michael Hancocks, whose family had owned the farm for 200 years, started a bottling operation using this spring. Following the granting of the abstraction license in May 1991 by the National Rivers Authority, the water was shipped to Aston Manor Brewery for bottling and sold under the Malvern Springs label, something that Schweppes took exception to. In 1994 this made the headlines and the Malvern Gazette of 24 June featured the story that was also covered on radio and television. There followed in 1995 an extensive process of litigation, when it was alleged that the label, by implication, suggested a Natural Mineral Water, similar to Schweppes Malvern Water, rather than spring water. The arguments with Schweppes and Trading Standards rumbled on through the court process into 1997. Eventually an 'agreement' was reached and the bottling ceased. 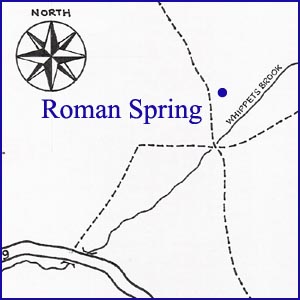 2. Tanks once used to store the spring water.
3. Michael Hancocks of Aston Manor with the offending bottles. (Malv. Gaz. 24 June 1994)