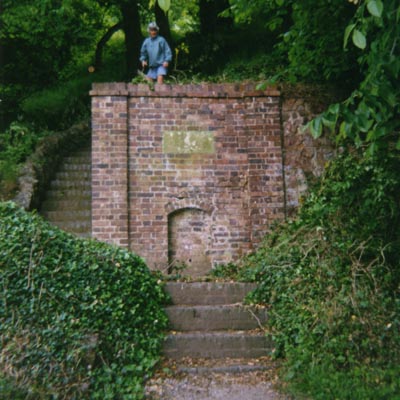 Location: Behind the Clock Tower at North Malvern.
Description: a brick wall against the bank, once with a spout, now derelict.

Malvern's greatest problem in the nineteenth century was a lack of water. Every year millions of gallons fell on the Malvern Hills and every year millions of gallons ran to waste. There was nowhere to store it, so it was a great blessing when in 1835 Charles Morris built a 10,000 gallon water tank for the inhabitants of North Malvern. It was sited on a piece of the hill slopes belonging to T.C Hornyold of Blackmore Park and cost Charles Morris just over 80 pounds, with access across the common until the North Malvern Road was constructed.

The tank was built to a standard pattern and is similar to the others that Charles Morris paid to be erected at West Malvern and Malvern Wells. Access to these tanks was through a manhole in the roof, but the roof of this chamber collapsed many years ago and the chamber is filled with soil and broken bricks. This may have been the result of years of earth-trembling vibrations from the nearby quarry. An inscribed plaque above the spout reads: 'Any person who wilfully damages this reservoir will be prosecuted according to the law.' The plaque was renewed as part of the Heritage Lottery Fund restorations in the early 21st century. The water came from a spring in North Valley but that water now runs wastefully into the storm drain.

Charles Morris Jnr (1799-1856) was the son of Charles Morris (1768-1844) and Sarah Haldimand (d. Oct. 1841) of 41 Bryanston Street, Portman Square and The Manor House, Wandsworth, and the grandson of James Morris, Deputy Lieutenant of Surrey and High Sheriff in 1764. His brothers and sisters were Frederic (d.1821), Emma (d.1832), Anthony (d.1842), Jane (d.1869) and James (d.1883) who was a Deputy Governor of the Bank of England. All died without issue. Born in London, Charles Morris Jnr was described in the 1851 census as a Proprietor of Houses, of Portman Square, London. From the 1830s he came to Malvern annually to live with his spinster sister, Jane, at The Chase (now demolished), Worcester Road, returning to London during the winter months. He was wealthy, childless and not given to society gatherings, and with so little to spend his money on he became a prominent benefactor to the town. and provided the first public water supply to North Malvern, Malvern Wells and West Malvern.

The Morris Gifts One of Morris's earliest benefactions was the path round the Sugar Loaf which was made c.1830. He provided water tanks here in 1835 and 1836, another in Malvern Wells in 1840 and another in West Malvern in 1844. When the church of St.Mary's at Guarlford was built as a chapel of ease in 1843 its communion plate was a present from him. He gave UK pounds 200 and his sister UK pounds 100 towards the building of the Mill Lane Schools, and similar amounts to the casualty ward in Malvern. The local Horticultural Society also benefited from his generosity: he gave UK pounds 12 annually in separate prizes for the poor cottagers who could not afford to adhere to the Society's strict rules and regulations so would have been excluded from certain classes. Local education also benefited.

Across the road from the Clock Tower is the North Malvern National School, built by Morris in 1838. It was most important in rural areas for boys to be taught to grow fruit and vegetables and maintain the soil and garden implements, and Morris provided the school with gardens.[1] The plaque at the front of the building reads: 'Morris School The former schoolroom being inadequate for the accommodation of the children in North Malvern and the adjoining parishes Charles Morris jun. Esq. erected this building A.D 1838. The school was enlarged in 1850 and completely remodeled in 1886.[2] By 1992 it was no longer in use. Charles and Jane Morris were the chief benefactors of North Malvern Church (Holy Trinity), contributing 3,000 pounds towards its building in 1851.[3] The east window and organ were also presented by him [4] and the two commemorative west windows were added after Morris's death. The plaque between the windows reads: 'This window is placed to the honour of God's house and in memory of his servant Charles Morris whose faith working by love bore the fruit of many good works and alms deeds in this parish and district. Erected by parishioners and friends MDCCCLVIII'. The windows also contain the text: "I was an hungered and ye gave me meat, thirsty, and ye gave me drink, naked and ye clothed me" from Matthew, Ch25 v35.

Charles Morris died suddenly on 16th December 1856 at 7 Connaught Place, London, and was buried in London. 'The lamented gentleman left the Chase for London on 27th November, in perfect health, and with every hope of again paying his customary visit to Malvern in the next season'.[5] In Malvern the shops closed for half a day as a mark of respect and a committee was appointed to think of a permanent memorial to him in the town. A new clock for the Priory Church was chosen, which replaced the existing 17th century clock; it was installed in 1858 and still keeps excellent time. There is no clock face attached, probably because so few people could tell the time, but it strikes the hours and every quarter in between. Florence Nightingale's father was irritated by the noise when he stayed at the nearby Abbey Hotel in the 1850s

1. What was once the spout.
2. World War II fire hydrant relic in the grass, lost when the HLF restoration was implemented circa 2005.

Further information:
Between the spout and the road was, until recently, an interesting relic of an early World War II fire hydrant. It lay in the grass and of the five or six brass hose connector nozzles, only three remained. The hydrant was connected to a six inch iron pipe supply. Nearby was a 10 feet x 9 feet water booster pumping station that was installed in 1953. 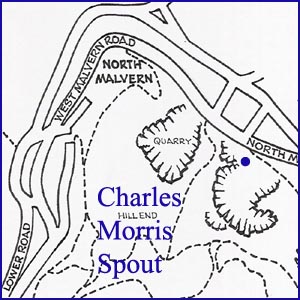